From neighbourhood cleanup to petitioning Parliament: How this learner’s interests drove his learning

From neighbourhood cleanup to petitioning Parliament: How this learner’s interests drove his learning

At SelfDesign Learning Community, we support each learner individually to meet their learning outcomes through the pursuit of their own interests, passions, skills, activities and more.

“We follow the BC Ministry of Education curriculum in a way that puts learners at the center of their learning journey,” says Principal of Educational Programs Nikki Kenyon. “And when you hold the learner at the center, then who they are directs everything. All of our work as educators then is in supporting them in being who they are, in helping them explore their interests.”

For Derek, his latest learning journey started out as a New Year’s resolution. He had volunteered to clean up his neighbourhood. But what the grade 8 SelfDesign learner noticed while picking up litter in

his Vancouver community in January made him ask more questions and dig deeper into what he was seeing, what it meant, and what he could do about it. It started him on a new learning adventure in whic

h he learned about pollution, petitions and Canada’s political system.

The journey began outside his front door.

“There are several storm drains near our street and laneway that litter can get washed into, and I want to make sure that they stay clean,” Derek says. “One thing that stood out is how many cigarette butts there are. You’ll find a whole trail of cigarette butts, or a large pile next to the curb.” 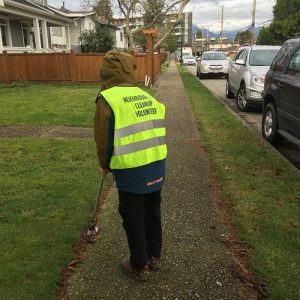 Because he’s enrolled in SelfDesign, Derek was able to look into the topic as part of his learning. He could talk it over with his learning consultant and with his peers in Grade 8 themes and circles, and he could even turn it into a learning project.

In his research, Derek found out that discarded cigarette butts weren’t just the most common type of small litter in his

neighbourhood, they were common everywhere. Cigarette butts account for almost 50 per cent of litter in Canada, and in 2018, over half a million discarded butts were found on Canada’s shorelines.

He also learned that although cigarette butts are made of plastic just like bottle caps,

straws and candy wrappers are, they’re even more harmful to the environment than other small litter is. They contain hundreds of toxic chemicals like arsenic, lead, nicotine, toluene, butane and heavy metals that can harm humans and wildlife.

Armed with this new knowledge, Derek decided to act. His goal is to make cigarette butts have less of an impact on the environment.
“While picking up cigarette butt litter every week helps the neighbourhood, it doesn’t help the major problem of cigarette butts globally,” he says. “That was when I decided that I should make a petition to help solve this problem.”

His first idea was that the amount of cigarette litter on the streets could be reduced if a deposit-return system, just like with plastic bottles, was put in place. That way, people who smoke might dispose of them properly in exchange for cash instead of tossing the butts on the streets.

He sent the idea to a Member of Parliament, but when they responded.

Derek learned that his idea “wouldn’t really work on a federal level and should just be implemented on a provincial level,” he says. “This was discouraging at first, but then it got me into doing deeper research about cigarette filters and why they weren’t included as part of the single-use plastic ban.”

He found that many Canadians have tried to have cigarette butts banned as a single-use plastic. However, the proposed bans have all been turned down because no viable alternatives to plastic cigarette filters currently exist.

That gave Derek a new idea for a petition to help develop a viable alternative.

On March 23, he launched Petition e-3258 to the Government of Canada, asking the federal government to apply a nationwide fee of $1 per pack of cigarettes to be used as funding for further research into finding a viable alternative to plastic cigarette filters. The petition is open to all Canadian citizens and residents to sign until 8:30 am (Pacific time), July 21 2021.

Until then, Derek has already learned so much since picking up litter on his street in January:

“I have learned about different levels of Parliament and how petitions work,” he says, “as well as understanding that changing things is not easy and you have to consider all of the side effects.”

And this, says Nikki, is exactly the kind of self-directed exploration that SelfDesign’s learner-centered approach encourages.

“Our program requires learners to take ownership of their learning. It requires them to build a plan for themselves and think about how they’re going to achieve their plan,” she says. “What’s unique about how we do that is that we actually allow the space and time for that to develop.”