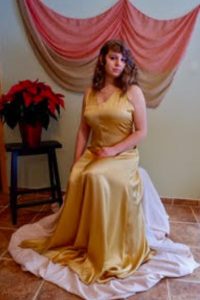 When Grace finished grade 12 last June, she posted a message on social media:

“Whoever thinks that people who learn at home can’t graduate is wildly misinformed. We can do just as much, if not more, than somebody who goes to regular school.”

Like many members of our 110-learner-strong Class of 2022, Grace is an excellent example that SelfDesign learners have all the same opportunities for careers and post-secondary studies as any young person who graduates from a brick-and-mortar school in British Columbia. After having been with SelfDesign Learning Community for most of her kindergarten to grade 12 years, she is now preparing to start her university program of choice … with a full entrance scholarship.

Next September, after a gap year, Grace will leave the small rural community where she grew in British Columbia’s west Kootenay region to begin the four-year Bachelor of Arts theatre program at the Fountain School of Performing Arts at Dalhousie University in Halifax. There, she’ll work towards an Honours degree in historical costume design.

It’s the only program of its kind in North America.

Indeed, SelfDesign Learning Community has an excellent track record for learners successfully completing grade 12. More than 91 per cent of our learners achieved their Dogwood or Adult Dogwood diplomas last year. In addition, the number of our learners who finish the courses they register for and start is high compared to many other B.C. online schools.

“Of all the learners in grades 10 to 12 who start one of our courses, 95 per cent successfully complete the course,” says SelfDesign Chief Learning Officer Nikki Kenyon. “The provincial average for online courses completed in 2019/2020 was about 65 per cent. This indicates SelfDesign is doing something right to keep our learners engaged and active in our courses.”

“School just wasn’t a huge part of my life at all,” Grace says of most of her school years. She and her older brother were both enrolled with SelfDesign, and their learning was freestyle, self-directed and very, very fun. 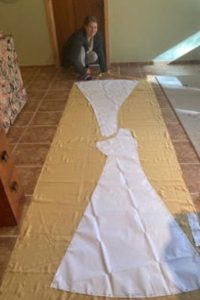 “We didn’t follow a curriculum,” she says. “Almost every single day, I would choose what I wanted to do — I would see something online or in person, and I’d be, ‘Oh, I really want to learn how to do that.’ And I would just find a way to learn about it. We were always playing outside and figuring out how to climb trees and build things out of rocks and sticks. Or we were in the kitchen helping my mom bake and cook. I loved it!”

Although she picked up most skills easily as a home learner, she was slow in learning to read. She was tested and found to have dyslexia – a condition that makes it difficult to read or interpret words, letters, and other symbols – and needed support and help to learn to work with the challenge. It’s no longer something that holds her back in any way, but she recognizes that she requires extra time to read and write anything. When possible, she uses computer programs that convert her speech into text and that read text out loud.

As she approached grade 10, Grace was no different than many young people going into high school – she had absolutely no idea what she wanted to do later in life. She decided, however, that she wanted the option of being able to go to university.

“It’s amazing how society influences our views on learning, based on the typical school model,” says Fonda, who was Grace’s learning consultant from grade 8 to grade 12. “When I started working with her, Grace was already learning based on her interests. She was also worried about being able to acquire the ‘right’ skills and tools to make it through high school. I remember encouraging her to set aside the ‘have-to’s’ and focus on what she really loved. If she took off the external pressures, then there would be more space for her learning to unfold naturally. She dove deeper into her interests in baking, decorating, sewing, and fashion.”

Getting her Dogwood Diploma (B.C. Certificate of Graduation) was Grace’s only learning goal in grade 10, but in her first semester that year, she surprised herself by doing really well. Grades hadn’t been something she’d paid much attention to before, but she found she liked getting good marks.

“I put pressure on myself – I wanted to do well again,” Grace says. “I talked with my teachers and told them, ‘I need you to tell me what I need to be doing in order to achieve what I want.’ They were great and so helpful! And I continued to do well.”

Fonda, however, was not surprised that Grace did well and continued to do well.

“She had developed strong time-management skills through project-based learning and used those skills to stay on top of her academic work in grades 10 to 12,” Fonda says. “Getting good grades in grade 10 encouraged her to keep aiming for the stars, and her projects just got bigger.”

Then, halfway through grade 11, Grace found out about the Costume Studies program at Dalhousie.

“It was perfect for me,” she says. “I’d never really thought seriously about what university might look like, and suddenly I was, ‘Oh, I want to do this … but it’s so far away, and I’ve never done school like this before….’ It was all a bit scary, but I decided that it was what I wanted to do, and it became another of my goals – to continue to keep my grades up in order to get into university.”

During their weekly Observing for Learning meetings, Grace and Fonda had talked about fashion and costume design programs in post-secondary.

“I encouraged Grace to go and visit a school when she was traveling one year,” Fonda says. “It was definitely exciting when she chose to apply to the Costume Studies program at Dalhousie University in Grade 12, and of course, she took the opportunity to visit the campus and create a photo journal of her time in Halifax.”

Grace says she had never thought she would be the kind of kid who did really well at school. But, she says, “once I decided I wanted to graduate from high school, it became this thing. And through it all, all of my educators and my learning consultant were so supportive. They would tell me, ‘If you want this grade, you need to do this amount of work or you need to curate this or do that.’ I never felt not supported in reaching my goals.”

A proud moment for Fonda came when Grace was in Grade 12. Grace was taking English 12 – a course she’d thought would be very challenging.

Fonda says, “She felt so confident in her own learning, her own writing, and the depth of her engagement in the course – proving to herself and the world that she can do anything she puts her heart into!” 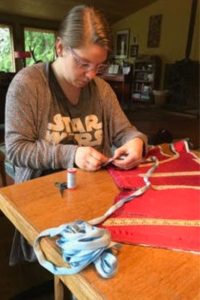 “I love sewing and costume design,” she says. “Those are my biggest interests, especially the history side of it.”

Those interests also tie into her love of old movies. She and her mom often have movie nights where they watch a film from the 1930s or ’40s or ’50s.

Those interests inspired her personal learning projects throughout grades 10 to 12.

For her first grade 10 project, she made a winter coat. Her next project was a 1950s-style dress, and she also explored that era’s fashions.

“She pushed herself each semester to try something new with another layer of challenge, and came up with some really fabulous creations,” Fonda says. “She’d been dreaming of sewing a corset for a year before she jumped in, and of course she jumped off the high-dive platform with grading the pattern and tailoring it to her exact fit.”

During the first semester, Grace mocked the pattern up to make sure it would fit before she made it. She graded and gridded the pattern, expanding it to life-size from the tiny pattern shown in the museum book, and then altered it to fit her. She took heaps of measurements, figured out all the proportions, and then drew the pattern, using the math she was learning in her grade 11 math course.

In the second semester, she made the corset.

“I tried to make it as accurate as the original,” Grace says. “It was so detailed, and it took me forever. I had to hand-sew most of it. But I learned so much from doing it and about everything to do with corsets.”

She sewed the garment from a length of silk that a friend had given her. For the boning that gives a corset its shape and support, she used zip ties — because, she says, “It’s hard to get whalebone these days, right? And using it would just be so ethically wrong.”

She also recorded a video about corsetry to explain the garment’s history and debunk the myths surrounding it.

“People think that corsets are really bad for you because they’re super tight, even though women wore tight corsets only during a very brief period in history. But that’s swayed everyone’s view of all corsets from all times.”

The pattern for Grace’s corset predates the Scarlet O’Hara–type tight corsets of the mid-1800s by about 200 years.

“It’s snug,” she says. “It’s supposed to be, but it’s not supposed to impede your movement or breathing in any way.”

For her capstone project in grade 12, Grace sewed a dress inspired by a Mae West movie costume from the 1930s using an authentic 1939 dress pattern The fabric is gold, fine, and slippery – difficult to work with – but she says, “It was the simplicity and slinkiness of it and the Hollywood vibe that I really liked, and I could see myself wearing it and being comfortable in it. And I learned so much about the 1930s and these kinds of dresses – I was really in my element of learning!”

She documented the process of making the dress in her online learning portfolio. To accompany that, she made a short documentary about a leading Hollywood costume designer from the 1930s, ’40s and ’50s, named Edith Head, who designed for Mae West, Audrey Hepburn, Bette Davis and other movie stars of the time. 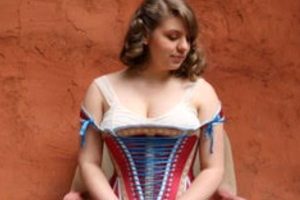 Grace modeled her gorgeous golden capstone project at the June Commencement ceremony, where she met many of her classmates in person for the first time. She also spoke about surprising herself with the level of her success, about reaching for dreams, and about starting down the path towards actually achieving them.

“Throughout my life – and I think my parents have come across this a lot too – it seemed that some people were almost disappointed when they heard I was a home learner,” she told us later. “I got that a lot. They’d be, ‘Oh, too bad! You have so much potential.’”

She smiles. “And look at me now! I’m using that potential. I did it!”