Discovering that just one or two people can change the world for the better is a powerful lesson.

Rupert learned that lesson when he was 10 years old. And as a result, the SelfDesign learner embarked on an eight-year journey that led to him incorporating his passion-driven volunteering and advocacy work into his learning and being recognized with multiple awards and with a BC Ministry of Education School District/Authority scholarship for community volunteering.

It started in November 2014, when Rupert attended the David Suzuki Foundation’s Blue Dot Tour event in Victoria, British Columbia. The event was part of the launch of the foundation’s Blue Dot Movement, which aims to enshrine the right to a healthy environment in Canadian law.

“At the event, David Suzuki asked everyone to persuade all three levels of Canadian government to recognize environmental rights,” says Rupert, who commenced from SelfDesign as part of our Class of 2022 in June with a Dogwood Diploma (B.C. Certificate of Graduation) and starts classes at the University of Victoria this fall. “As a young person, I felt powerless and did not know where to start. So I wrote a letter to the candidates running in the Victoria municipal election, telling them that if they supported making an environmental rights declaration, I would ask my parents and others to vote for them.”

With help and support from others, he then also organized and spoke at a rally to take place the following month outside Victoria City Hall, during the new Victoria government’s first council meeting. Meanwhile, inside, Council unanimously passed a motion to declare the environmental rights of the city’s citizens. These rights include, for example, the right to breathe clean air, the right to drink clean water, the right to consume safe food and the right to participate in decision-making that will affect the environment. The declaration also states that the City of Victoria should take cost-effective measures to prevent the degradation of the environment and protect the health of its citizens.

“I could see how a kid could make real, positive change,” Rupert says of that day, “so I continued.”

Over the years that followed, he and his younger sister, Franny, a SelfDesign learner now going into grade 11, wrote hundreds of letters, organized events, educated their peers, and met with municipal leaders from across B.C.

Their work led to an additional 23 B.C. municipalities declaring the environmental rights of their residents. 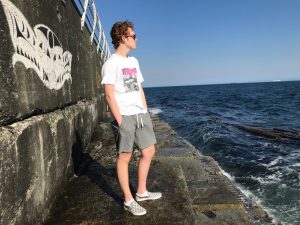 “What I like most about SelfDesign is the ability to customize my learning,” Rupert says. “I am able to create a learning experience that reflects my interests and passions. I am able to build and hone skills that are important to me. And the flexibility and support offered by SelfDesign has been essential to my success as a learner and as a person.”

Rupert’s family first came to SelfDesign when he was in grade 3.

“I experienced a brain injury in grade 2, and I needed more support and flexibility than I was being given in my brick-and-mortar classroom,” he says. “My parents spent a bunch of time looking at different options and when they learned about SelfDesign, they knew that was the right fit for me, my education, and our family.”

Because of SelfDesign’s unique, learner-centred approach to learning, flexible schedule and layers of support for learners, Rupert says he met – and exceeded – his learning, creativity, advocacy, and wellness goals. He was also able integrate his passions, interests, and goals – including aspects of his environmental work and volunteering – into his learning plans and outcomes.

The support he received at SelfDesign was a key factor in his learning success.

“My learning consultant Samantha, my various learning specialists and the SelfDesign Support Education team have all helped me meet my goals through their constant guidance and encouragement,” Rupert says.

Samantha started working with him when he began grade 8.

“When I first connected with Rupert and his family, I knew this family was something special,” she says. “I would receive weekly reports from Rupert’s mother that were so beautiful, full of pictures, pages long listing off all the amazing work Rupert and Franny were involved in. I quickly became aware that this was a family of high achievers who are ready to make changes in our world. Starting in grade 10, Rupert and I met weekly over Zoom every week of the school year. This is when I really began to get to know Rupert as the amazing individual that he is.”

As his learning consultant for five years, Samantha has been part of the highs and lows, ups and downs of Rupert’s learning journey. “Rupert always tries his best, which is reflected in his work this year. He works very hard; he is very resilient, humorous and persistent,” she says.

Rupert says SelfDesign taught him how to be independent, self-motivated, and how to set and meet specific, measurable, achievable, relevant goals.

“It taught me about my unique strengths and capabilities and how to take advantage of them in my learning,” he says.

Developing his voice through music

Rupert’s other passion is music. As a SelfDesign learner, he explored and developed his skills and talents in that area. At age 13, he started teaching himself guitar. He quickly progressed to writing, playing, recording, mixing, and releasing his own original songs. He also plays bass and is learning to play the drums.

Samantha says she has watched Rupert grow and develop this passion and combine it with other interests –  history and anthropology – in projects throughout his grade 10 to 12 years. These explored, for example, the science of sound in music, song writing, how music has been used to change the world, and visual aspects of making music.

With nods to bands such as the Pixies, Guided by Voices and the Strokes, Rupert’s solo music project, Teenage Art Scene, launched in 2019.

“Rupert is deeply passionate about music, and he has already released four albums and two EPs of all his original music,” Samantha says. “His music is available on all streaming services. His last two albums have charted on university campus radio stations across Canada, and he recently made a music video. He is resilient, hard-working and a determined individual.”

“We see our role as being here to support each learner, to hold them up as they explore their interests and passions and grow, learn and develop,” says Nikki Kenyon, SelfDesign’s Chief Learning Officer. “They have the opportunity to use their interests and passions to meet BC Ministry of Education curriculum requirements, and by the time they leave SelfDesign, they are set up for their future in a really beneficial way.”

“I hope to continue to write and play music that others want to hear,” Rupert says. “I plan on digging deeper into my music and hope to start playing shows.”

In 2018, Rupert and Franny switched gears with their environmental advocacy. Moving beyond the B.C. municipal-government stage, they began meeting with provincial and federal leaders to increase awareness about environmental rights and campaign for the adoption of a Bill of Environmental Rights.

He travelled to San Francisco to speak to young environmental leaders from around the world. In Toronto, he presented to top environmentally and socially minded business people. The siblings hosted Earth Day events in Victoria, their hometown. They’ve also spoken to thousands of people at climate rallies about the connection between environmental rights and the climate crisis.

In 2019 and 2020, they helped persuade dozens of B.C. municipalities to declare climate emergencies, thereby focusing more attention and effort towards addressing and mitigating climate change at the local level. 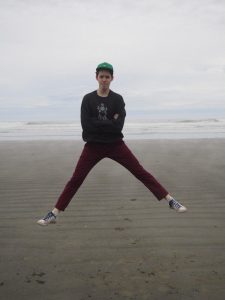 As a result of their work, the siblings have been recognized with multiple awards. Environmental organization Starfish Canada distinguished Rupert and Franny as being among the Top 25 Environmentalists Under 25 in both 2014 and 2016, and the City of Victoria awarded them its Mayor’s Medal Award in the environment category in 2015 and its Honorary Citizen Award in 2018. They received the 2016 International Youth Eco-Hero Award and the 2017 Gloria Barron International Prize for Young Heroes.

Rupert also was nominated as a BC Centre of Ability, Community Brain Injury Program, Hero of Ability for 2013.

When pandemic health restrictions limited in-person meetings in early 2020, Rupert took much of his volunteering and advocacy work online. He continues to attend and present at online workshops, and to write articles. He and Franny also submitted a House of Commons Petition requesting that the federal government update the Canadian Environmental Protection Act and to include environmental rights language in the updated Act.

The petition gathered more than 8,000 signatures and was presented to Parliament by the siblings’ Member of Parliament, the Honourable Laurel Collins.

“I have had amazing opportunities to connect with people and to speak about something I believe in, whether it was at a film screening I planned or co-hosted, a school I visited, meeting with the premier or federal party leaders, creating accessible materials to explain environmental rights, or creating art with a collaborative community of youth about environmental rights and its relevance to our sense of place,” Rupert says.

“Rupert is a leader,” Samantha says. “He is highly involved in his community and has worked very hard to change the Canadian Environmental Protection Act. He has achieved so very much in his young life.”

Now that he has commenced from SelfDesign, Rupert’s next learning journey will unfold at the University of Victoria. There, he will be studying anthropology and music to explore the relationship between music and culture.

Rupert also intends to continue using his voice for change.

“I hope to continue to nurture my own music, building my discography and touring, as well as finding ways to use music to create positive change, “he says. “I feel so lucky that I found my voice at such a young age, and I hope to continue to use it to make the world a healthier place.”

Learn about what other learners have done to support the environment