It had been three years since the last provincial mountain biking championships took place, but grade 12 SelfDesign learner Pedar Ree was ready for the one-day event, held in Langford, near Victoria, last week. He placed 20th in the Senior Boys category.

“I basically spent most of the last two years training,” he said when we caught up to him, two weeks before the race. “My first race was in 2017. Then the high school race program started up in 2018, but it stopped for two years, due to COVID, and it just started up again this spring.”

Each year, BC School Sports, a not-for-profit organization with about 450 public and independent secondary member schools from across the province, works with industry partners and educators to host and run the High School Provincial Mountain Bike Championships. The event brings together riders at all levels – those new to the sport, as well as more experienced riders – to build confidence and experience the joy of competing as a team against their peers. Held this year on May 27, participants pitted themselves against rolling, technical terrain at Langford’s Jordie Lunn Bike Park, including on the park’s very steep “Gravity Zone” trails. 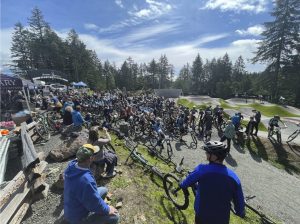 Teams race in both a cross-country race and an “enduro” race. The enduro allows riders to take up to three hours to climb the hill to the top of the designated stage – or leg of the race – and then racing downhill. The faster a rider can get down the hill, the better the resulting time that is added to a team’s total points for the entire event. The combined races allow riders who are strong in either “uphill” and “downhill” mountain bike racing to contribute to their team’s points for the championships.

Pedar participated in both races, as is required, but also enjoys both – “the enduro, moreso,” he says, “as it’s a race on the downhill.”

Because our learners come from across B.C., SelfDesign doesn’t have its own high school–level mountain biking team. Pedar competed as a member of a combined-school team from the Vernon area.

“I raced for a team called the Seaton Sonics, for W.L. Seaton Secondary School, for a couple of years, even though I wasn’t going to that school,” he says. “But the coaches realized there weren’t enough students to make it a big enough team, so they combined all the students in the Vernon and Coldstream–area schools into one team.”

Pedar is registered with BC School Sports as the sole SelfDesign learner competing in the high school championships this year.

[See the infographic, below, to learn more about how to compete in individual or team sports as a SelfDesign learner.]

Now in grade 12 and about to commence from SelfDesign with a Dogwood Diploma, Pedar enrolled with SelfDesign Learning Community in kindergarten. He and his two sisters learned at home on the family’s three-acre farm near Vernon all the way through.

“We heard about SelfDesign from a friend of ours who used to work with the school,” he says. “There was only so much my mom could teach us on her own, and SelfDesign offered a lot more online.”

The increased interaction with other learners that SelfDesign offers appealed to Pedar.

“Before I started to meet online with other learners in grade 8, it was always a struggle for me to find friends within homeschooling, because so much of what you do is on your own and at home – unless you know other homeschooled kids nearby,” he says. “SelfDesign offered that social aspect, particularly once I got into grade 10. There were more things to do and learn, and there was more opportunity to interact with and get to know other learners.”

SelfDesign also allowed him to focus on and develop his interests and hobbies. In addition to mountain biking, he skis cross-country and downhill. He’s passionate about photography – an interest he explored and developed as part of his learning with SelfDesign – and he enjoys playing guitar and piano.

Pedar says he really appreciates how SelfDesign helped him develop as a person.

“Seeing different perspectives around the world,” he says, “and learning to look beyond what you might see and be exposed to on the Internet or TV and to dig beyond what you normally might think. The weekly challenges and discussions with my learning consultants and other kids in my grade really made me think about how I think, how I process and interact with information, and how I learn – and take ownership of that.”

SelfDesign invites learners to make their own connections and reflect on their learning.

“It’s really open minded and open ended,” Pedar says. “SelfDesign really opens up the perspectives of different learners and how we might learn differently and approach things differently.”

A unique and supportive approach to learning 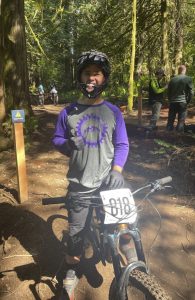 Pedar says he had long had a sense that he learns differently than his friends who attend brick-and-mortar schools do. “I’m much more hands-on. I really enjoy learning through doing and through experience. I don’t learn as well through text books, for example,” he says. He also says he can find it stressful and difficult to adjust quickly to unpredictable events – such as sudden schedule changes or changes in plans.

“With a lot of the weekly challenges assigned in grade 10 to 12 with SelfDesign, I was able to see my own skills as a learner develop, and I was really just able to interpret information and become aware of how I processed it and shared it, and generally how I could take information and be curious about it.”

A couple of years ago, Pedar was diagnosed as being on the autism spectrum, which confirmed and helped to explain his earlier observations about his learning processes. With the diagnosis, SelfDesign provided options for additional support for Pedar, including working with amazing support providers in the local community, who supported him as he worked towards his learning goals.

One of those support providers – someone Pedar now considers a mentor and friend – offers mountain biking clinics in the summer and leads snowshoeing tours during the winter. Pedar’s experiences with those activities as part of his SelfDesign learning have led him to getting a mountain biking coaching certificate with the Professional Mountain Bike Instructor Association.

“It certifies that I can teach Level 1 – basic to intermediate riders,” Pedar says. “I’ve since started helping my friend teach and lead kids and adults riding skills” – something Pedar is now considering exploring as a possible career option, along with guiding and leading tours.

Pedar also started working with a tutor, who has also since become a good friend.

“I got more support, and having the diagnosis allowed me to work with how I learn, as opposed to just struggle along. It really opened up the potential for learning,” he says.

“People think that when you learn from home, you have more time to do other things,” Pedar says. “But, really, you have to manage your own work schedule, your work flow and how much time you’re spending on screen versus getting outdoors or whatever. I had to find a balance that worked for me. My passion is mountain biking.”

He started mountain biking when he was eight years old. He credits his ability to continue riding, training and racing while managing his school work to keeping lists of everything he needed to do each week – and to the support he received from SelfDesign.

“I managed it with a lot of support from my learning consultant and learning specialists,” Pedar says.

Now that he is finishing grade 12, this year’s championships will be the last high school race Pedar is eligible to compete in. But he plans to continue mountain biking.

“I hope mountain biking will be a big part of my life for a long time,” he says. “I’d like to do it for as long as I can. I would like to ride bikes professionally. That would a big commitment of learning and racing and finding some sponsorship, and all that. That would be really fun, but we’ll just have to see.”

He says, “As long as I can get outside and ride my bike, I’m pretty happy.” 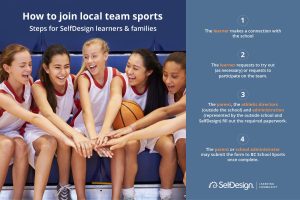